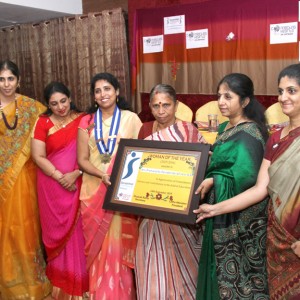 SI Madurai has a tradition of bestowing the honour of Woman of the Year” Award to an outstanding lady for remarkable achievement in her field of activity. This year this was awarded to Mrs.Premalatha Panneerselvam, Principal and Secretary ,Mahatma School (CCBSE) ,Madurai. She has made her mark in the field of education and also organic farming and is a well known personality in Madurai. She inculcates the sense of responsiblity towards society in her students in practical ways besides , educating through classrooms. SI Madurai has instituted this award with the  aim of providing motivation to women to always strive for excellence.